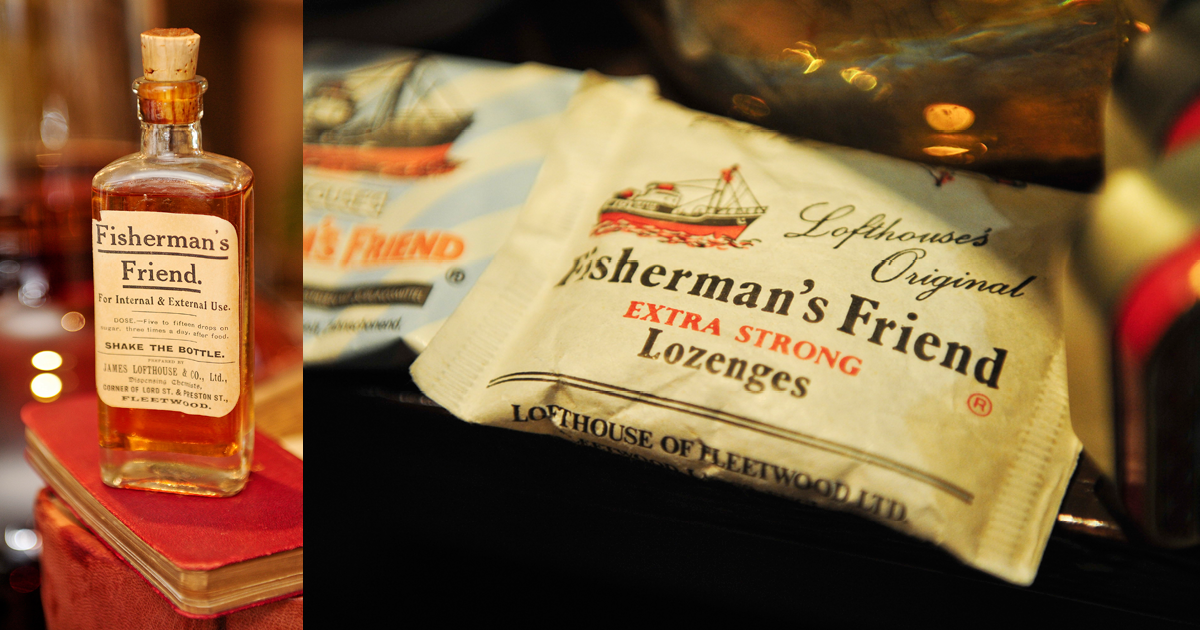 In 1865 the new town of Fleetwood in Lancashire, on the north west coast of England, was a thriving community and very much the center of the British fishing industry.

Fishermen from the region used to depart on long voyages from Fleetwood into the hostile and unwelcoming conditions of the North Sea and Arctic Circle.

These conditions were tough on the body and spirit. You had to be strong to do this job! The fishermen would suffer from coughs, colds and bronchial problems from prolonged exposure to the freezing cold and wet conditions.

One of the first residents of Fleetwood was a young pharmacist by the name of James Lofthouse. Amongst the many effective treatments and remedies that Mr. Lofthouse prepared was an extremely strong liquid, containing menthol and eucalyptus, which would help to relieve the symptoms and problems experience by the fishermen whilst on their many fishing expeditions.

The liquid was packed in glass bottles, which did not travel well on the rough seas. So, to make it easier to transport, Mr Lofthouse made the liquid into small lozenges which were much favored by the local fishermen who returned time and time again for their favorite remedy and soon came to know these lozenges as their „friends“ and would not leave the shore without them. It was, therefore, these first customers that gave us the name Fisherman‘s Friend.

Visitors from industrial areas close to Fleetwood soon discovered the effectiveness of the lozenges and news began to spread throughout the local county and demand Mr Lofthouse‘s Original Extra Strong lozenges began to grow.

The company remains family owned and fiercely ambitious to ensure that the future success of Fisherman‘s Friend is as glorious as the past. Commitment to product quality and dynamic management is of paramount importance whilst pioneering new markets and exploring opportunities in existing markets is the formula for continued success.

We are always looking to strengthen our workforce. Are you our next Brand Manager, Key Account Manager, Salesperson, Controller? Connect and stay updated about vacancies.

We provide customized and effective route to market solutions. Let’s do business together.

We send out relevant material about our company’s whereabouts and employees,
our latest insights into markets and trends  and our thoughts on how to be a market leader in an ever-changing world.

We may request cookies to be set on your device. We use cookies to let us know when you visit our websites, how you interact with us, to enrich your user experience, and to customize your relationship with our website.

Click on the different category headings to find out more. You can also change some of your preferences. Note that blocking some types of cookies may impact your experience on our websites and the services we are able to offer.

These cookies are strictly necessary to provide you with services available through our website and to use some of its features.

Because these cookies are strictly necessary to deliver the website, refuseing them will have impact how our site functions. You always can block or delete cookies by changing your browser settings and force blocking all cookies on this website. But this will always prompt you to accept/refuse cookies when revisiting our site.

We fully respect if you want to refuse cookies but to avoid asking you again and again kindly allow us to store a cookie for that. You are free to opt out any time or opt in for other cookies to get a better experience. If you refuse cookies we will remove all set cookies in our domain.

We provide you with a list of stored cookies on your computer in our domain so you can check what we stored. Due to security reasons we are not able to show or modify cookies from other domains. You can check these in your browser security settings.

We also use different external services like Google Webfonts, Google Maps, and external Video providers. Since these providers may collect personal data like your IP address we allow you to block them here. Please be aware that this might heavily reduce the functionality and appearance of our site. Changes will take effect once you reload the page.